DonQui has been travelling around quite a bit this past week. On Saturday he found himself in Bakewell — gateway to the Peak District if you are coming up from the south. 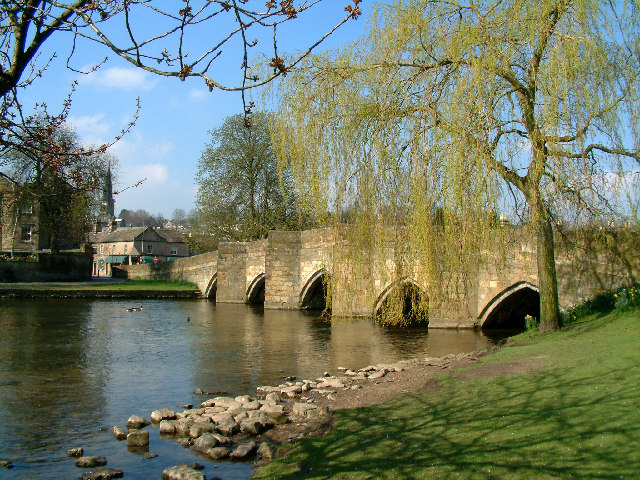 It is a pretty town with an ancient feel to it although DonQui learned that the many grey stone buildings only date back to Georgian times when they replaced the old medieval timber framed houses. The bridge over the River Wye is, however, truly old. It dates back 700 years and is built on Roman foundations.

DonQui had heard that Bakewell was famous for its tarts. This made his ears perk up until he learned that they were of the baked variety and even then they were not properly tarts at all. In Bakewell the almond paste, jam and pastry confection is a pudding. According to the Bakewell Pudding Shop the original recipe was a mistake when a cook, making a strawberry tart, poured the egg mixture over the jam instead of mixing it into the pastry.

To be truthful Bakewell puddings or tarts are not high on DonQui’s list of favourites. He was in need of something a little more refined. Stopping off at The Peacock for an afternoon pint of the local ale he ascertained that he would not be having dinner there. Although the food looked good the prices did not. He thought that £15 for a burger would make even a Panama accountant’s eye’s water.

On his way back from strolling along the river, by happy chance he passes Riley’s Restaurant. Menu looks interesting. He sticks his nose inside the door, Nicely decorated. It is mid afternoon and the lunch crowd has long moved on. A pleasant young man comes over and asks if he can help. DonQui decides to reserve for dinner.

Later that evening DonQui had one of the best meals he has had in a long time. A bowl of muscles in a delicious coconut lime broth to start, followed by a most exquisite dish of sous-vide lamb rump with a medley of spring vegetables.

DonQui has heard of the sous-vide cooking method before but has never tried it. Basically it seems to involve putting the meat in a vacuum sealed bag and cooking it for many hours by immersing it in moderately hot water. The result is evenly cooked, tender and utterly delicious. The medly of vegetables included asparagus, sprouting broccoli, pea shoots, peas and finely sliced radishes. Together with the juice from the lamb it had a wonderfully fresh, crisp, spring-like taste. 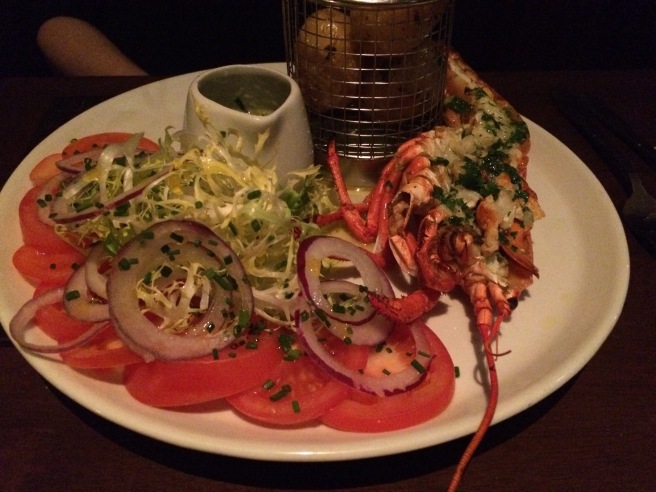 Duchess had half a lobster which was also delicious.

DonQui liked the ambiance and he liked the staff, all of whom were friendly, cheerful, helpful, and clearly proud of their establishment. 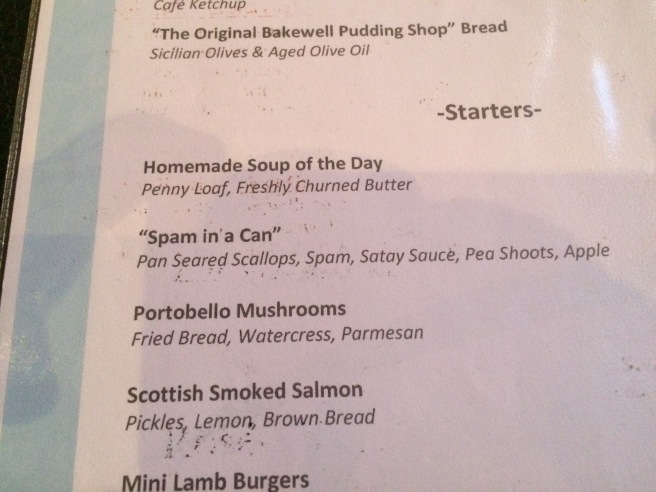 The chef also has a good sense of humour. DonQui considered trying out ‘Spam in a Can’ but didn’t— maybe next time.

DonQui Oaty is quite excited. He is in Stratford — the ‘upon-Avon’ variety, not the east end of London, nor Ontario for that matter — and he is going to see a play with carries a misspelt version of his name as its title. 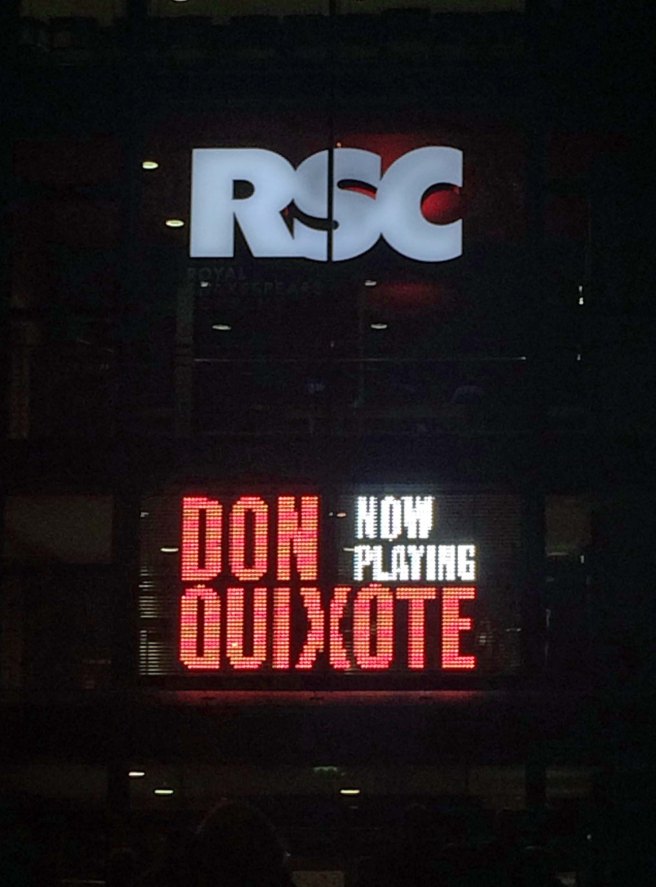 He is reliably informed that the original (a book not a play) was written by a Spanish chap who died 400 years ago in 1616. Apparently another person, quite famous in Stratford-upon-Avon, died that same year. The story is all about a donkey called Dapple who goes off on all sorts of adventures accompanied by two fairly hopeless humans called Don Quixote and Sancho Panza.

Duchess treats DonQui to a delicious pre-performance dinner at the theatre’s Rooftop Restaurant which, at £19.95 for two courses or £24.95 for three, is excellent value. The staff keep an eye on the show times and hold desert for us to enjoy in the interval washed down by a snifter of calvados.

DonQui has a great seat right against the stage which juts out into the audience.

He thinks the play is great fun: imaginative, witty and moving, with great acting, well timed comedy and some ingenious puppetry. Sancho Panza (Rufus Hound) is a great crowd pleasing showman. Don Quixote (David Threlfall) a Gandalf look-alike, anti-hero, switches from being completely bonkers to holding himself with quiet noble dignity in face of adversity. The Duchess (Ruth Everett) chillingly floats around the stage like a Dalek, her false smile hiding her cruel intentions. Even the horses have hilarious character, the actors taking turns to give them different emotions ranging from downtrodden to cowardly to camp.

The only criticism DonQui has is that the Donkey hero Dapple (who saves Sancho Panza near the end) should have had more lines.

Don Quixote is on at the Swan Theatre Stratford-upon-Avon until 21 May.