Getting his vegetable plot ready for planting is not one of DonQui Oaty’s favourite tasks. This is especially true if he has done nothing over the winter or early spring and let the weeds and grasses take over his allotment.

Fortunately he has learned a trick. This is to leave one plot fallow for a year with an old carpet covering it. Today he takes up the carpet he put down last year, exposing a weed-free plot. He moves it over to the next weed infested plot where he grew his beans last year. There it will remain and the weeds will bother him no more. 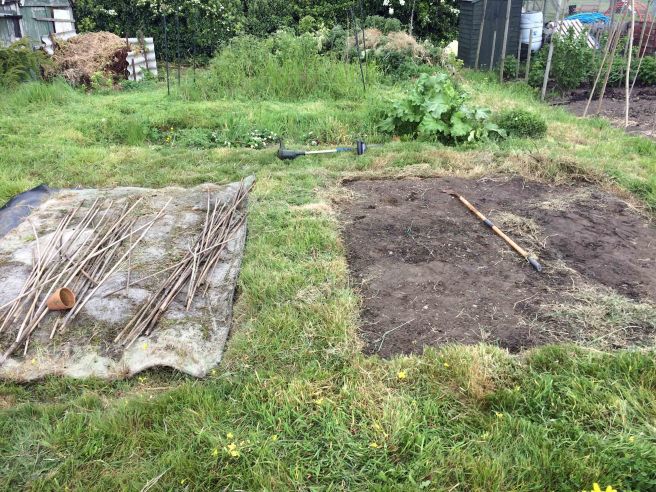 The newly covered plot on the left of the photo will remain that way until spring next year – weed and hassle free!  The newly uncovered one on the right will be home to this years’ crop of beans

It is Asparagus season.

With some of the best asparagus in the country grown up the road from his home stable by Sea Breeze in Wrentham on the Suffolk coast, DonQui decides it is time to have some.

His usual way of having asparagus is grilled with shavings of parmesan cheese. This time DonQui decides to try his hand at hollandaise sauce — something he has never cooked before.

Egg based sauces have tended to frighten DonQui a little. The idea of slowly stirring eggs at just the right temperature so that they do not curdle or scramble has always seemed just a little to tricky. Today he decides to put his fears to one side and give it a go — and very glad he is too. It is not as difficult as he feared and result is absolutely delicious.

Here is his recipe. It is heart-stoppingly calorific so if you worry about such things you should look away now and make yourself a healthy plain salad. DonQui can almost feel his arteries hardening just by looking at the lovely buttery sauce.

2 egg yolks. Separate the yolk from the white by cracking the egg in half and transferring the yolk back and forth between the shell halves, allowing the white to drip down into a bowl if you wish to use it later for a meringue or something else which needs egg whites only.

a dash of white wine vinegar or cider vinegar

a pinch or two of salt to taste

a pinch or two of cayenne pepper to taste 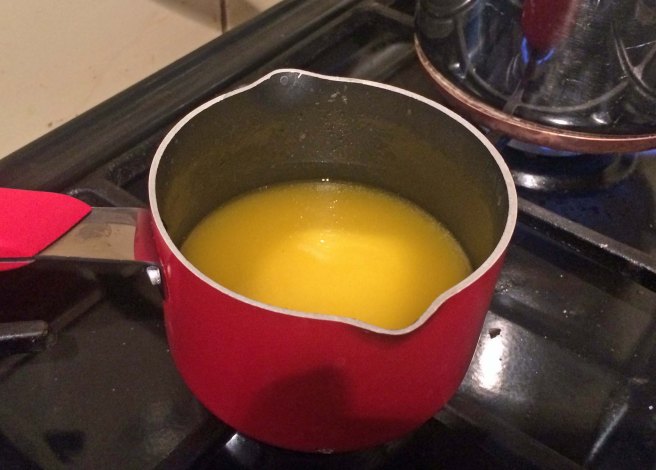 Gently melt the butter in a saucepan, skim any solids from the top and put to one side, keeping it warm enough that it does not begin to solidify.

Beat the egg yolks, adding the vinegar, salt, cayenne pepper and water in a heat proof bowl or jug that will fit into a saucepan. Better not to add too much salt at first as more can be added at the end but too much cannot be taken out.

Place the bowl in a saucepan of water that has been brought to the boil and kept to a very low simmer. Whisk continually for 4-6 minutes until the egg mixture begins to thicken.

Remove from the heat and slowly whisk in the melted butter, bit by bit until it’s all nicely mixed in to become a lovely creamy sauce. Season with a few squeezes of lemon juice. The lemon really transforms the sauce but DonQi doesn’t want it to overwhelm so he tastes it as he adds the lemon juice drop by drop. He tastes for salt and pepper at the same time and adds more if necessary.

DonQui is delighted with the result. At first he wasn’t sure if he had cooked the egg mixture long enough as it seemed a little runny when he took it off the heat. As it cooled down it began to thicken and in the end it turned out to be absolutely perfect. He has read that if the egg mix starts to thicken too much then a dash of cold water can save it. He did not have to resort to this.

Many recipes call for the addition of a bit of mustard. DonQui doesn’t really like mustard and he finds that a bit of cayenne pepper is a good substitute, leaving just a little tingle of heat on his tongue.

Poured over grilled asparagus it made for a lovely dish with the addition of a sprinkling of sea salt a couple of grinds of black pepper and chopped hard boiled egg.

Grilled asparagus tastes so much better than steamed in DonQui’s opinion. It is dead simple to do. Simply lay them in a baking dish, sprinkle with olive or rapeseed oil and place under the grill for 3 minutes on each side. Then sprinkle with sea salt flakes and a bit of ground black pepper.