…this is the Frontline Club.

On the ground floor at 13 Norfolk Place, London, W2 1QJ, is the excellent Frontline Restaurant which is open to non-members. While most of this part of London is given over to quick eats and the occasional good Middle Eastern or Malaysian establishment, Frontline offers excellent modern British cuisine. Fresh ingredients are often sourced from the Suffolk/Norfolk borderlands not far from DonQui’s home paddock of Southwold. 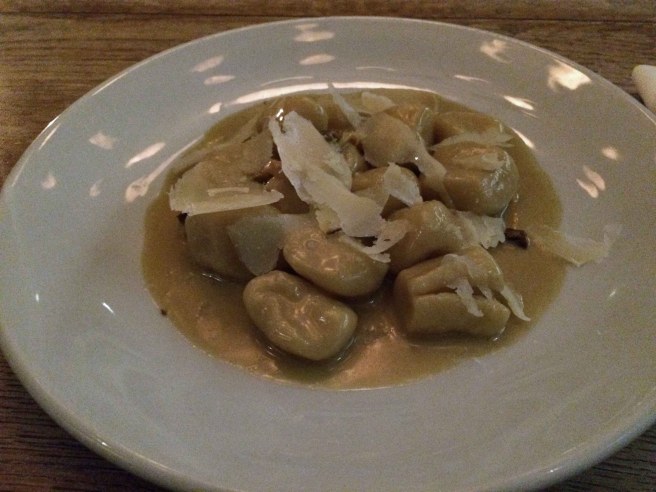 The menu is relatively small with a few standard classic dishes and an ever-changing array of more interesting choices. Tonight DonQui opts for a deliciously simple dish of gnocchi with wild mushrooms and pecorino cheese. It is utterly delicious and quite satisfying, the cheese adding a lovely tang to the velvety mushroom sauce.

Upstairs is the cosy members’ clubroom and bar. It is a perfect place to sit back, relax, have a drink or three and do a bit of work at the same time. DonQui is not the only one with his lap top open and a pint of Adnams beer (brewed in Southwold) by his side. There are also a number of rooms and it is in one of these where DonQui will rest his head tonight.

The club was founded by war correspondents and caters particularly to journalists who have worked on the ‘frontline’. The restaurant and club are decorated with iconic photographs of war and  conflict while the members clubroom housed bric a brac brought back by journalists from the Crimean War in the 1850s to modern Afghanistan and Syria.

As DonQui has a bit of a history trotting around various war zones with the media he feels quite at home here. You do not have to have had such experiences to become a member. If images of war and conflict put you off your dinner, however, you may not feel quite as at ease here as DonQui does.

The Frontline hosts an interesting series of talks, screenings and workshops which are also open to non-members.

In 2010 Vaughan Smith, the Frontline’s founder, offered refuge to Julian Assange of Wikileaks. This caused quite some consternation amongst many members, DonQui included. Fortunately the Club distanced itself from Vaughan’s personal support for Assange. This did not prevent the American journalist James Kirchick from slagging off the club in The Spectator, as place “where members preen like latter-day Hemingways amid lovingly curated war-reporting memorabilia.”

Maybe DonQui fancies himself as a latter-day Hemmingway. Whether true or not he rather likes the place.