After a couple of days in Strasbourg, during which DonQui took the opportunity to have a glass or three of the most excellent Alsatian Riesling (unfortunately very hard to find in the UK), he hires a car and makes his way over to the German side of the Rhine for a brief trip around the Black Forest.

His starting point is amongst the vineyards of Durbach where, in DonQui’s opinion, some of the best wine in Germany is to be found. None of it is exported so it is a treat he very much looks forward to whenever he is in the region. Those whose who have no experience of German wine, apart from the mass-produced stuff that makes it overseas, may be surprised by the superior quality that the inhabitants of the Rhine valley keep for themselves 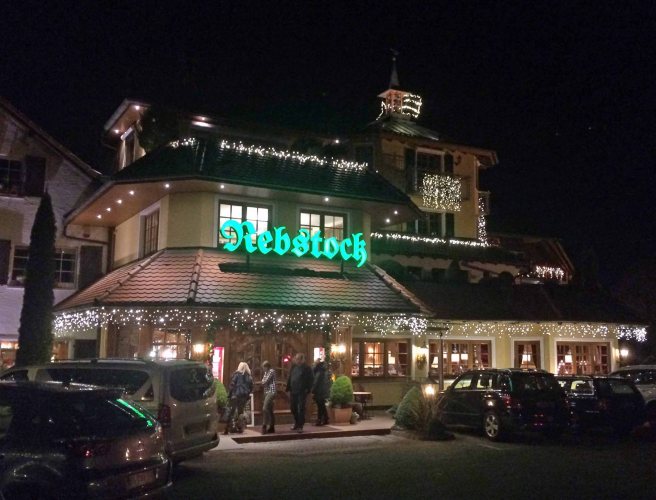 He stays at the most excellent Hotel Rebstock. In high summer season the prices there can be a bit eye-watering but off season it is very reasonable for a top-end establishment.

The food is superb… 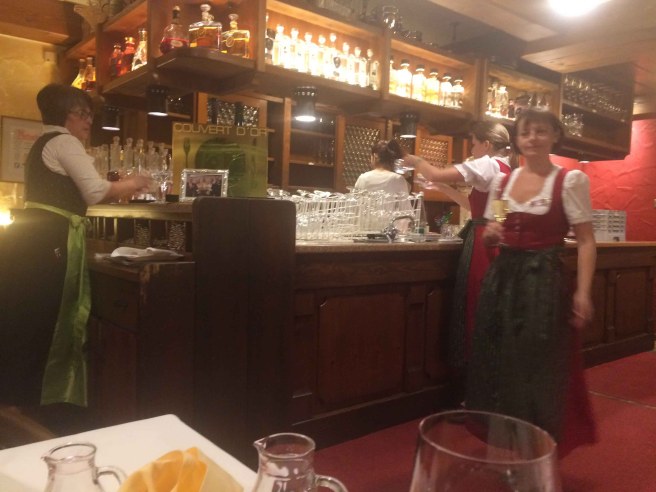 .. and the atmosphere most congenial.

In acknowledgement of the cold winter temperatures, they even lit fires in the grounds. 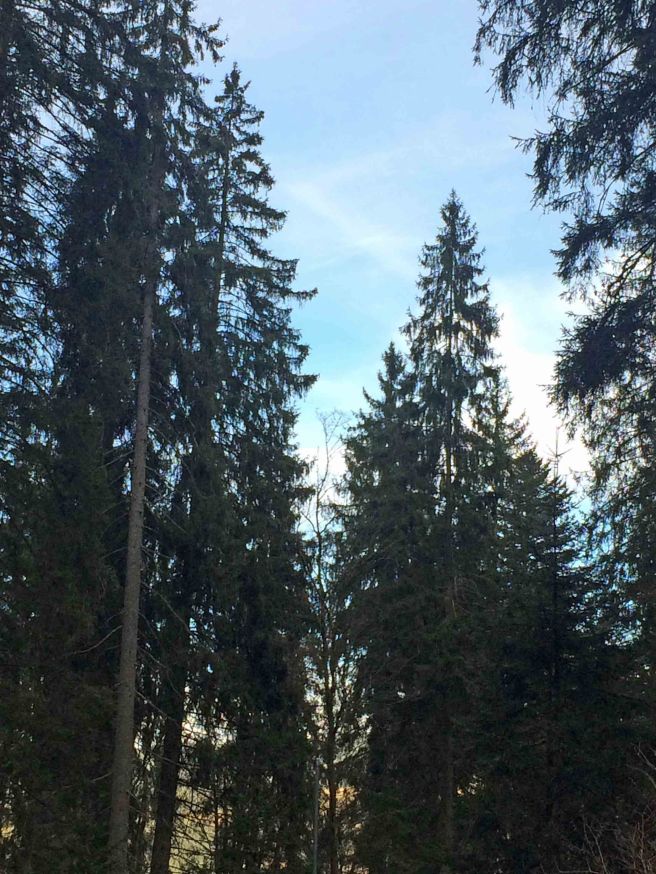 Beyond the low vine covered hills at the edge of the Rhine Valley lies the Black Forest, so named for the dark pine trees which grow on the slopes of the steep hills (almost low mountains).

As he descends into the valleys DonQui cannot help but admire the wonderful architecture of the Black Forest farms. The pre-Christmas scene is made more atmospheric by the dusting of snow on the hills. At one point he spies two magnificently antlered Hirsch (large deer) grazing in a meadow. 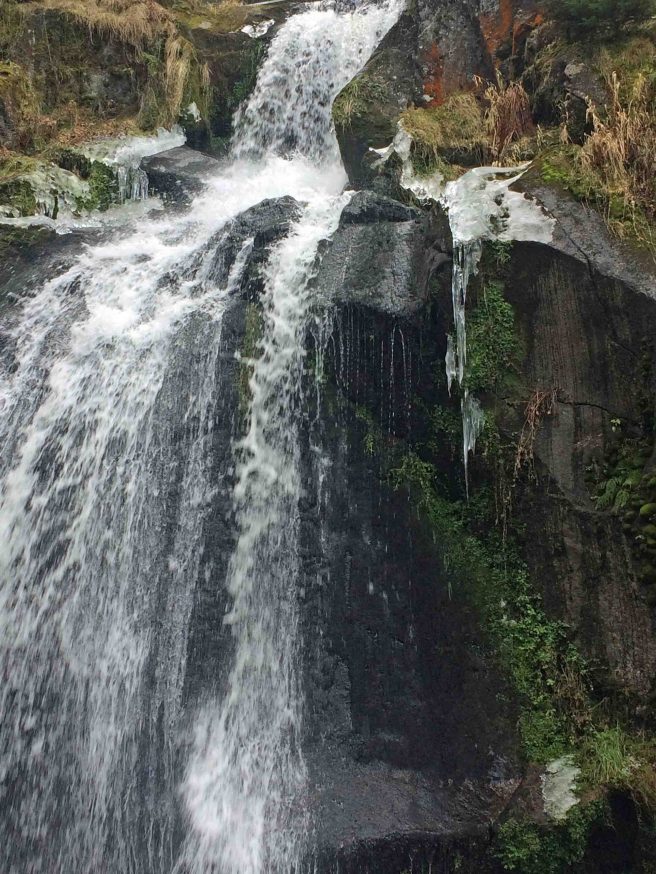 DonQui’s destination is Triberg, home of the Cuckoo Clock and also Germany’s highest waterfall. A well maintained walkway allows him to wander up alongside the waterfall where icicles form along the sides.

On the way back he stops off at the beautifully preserved late-medieval town of Gengenbach. This was a Reichsstadt (Imperial city) in the 15-1700s — held directly by the Holy Roman Emperor in Vienna rather than being controlled by local nobles. A Christmas market is in full swing so DonQui takes the opportunity to stock up on a few comestibles.

The town hall is decorated as an advent calendar with each window representing the days before Christmas.

Wandering through the Black Forest it is hard not to imagine ancient stories of wolves, trolls and fairies. DonQui even spies one dipping her toes in a pond.

DonQui is off on his travels again. This time he is going to Strasbourg — one of his favourite European cities. 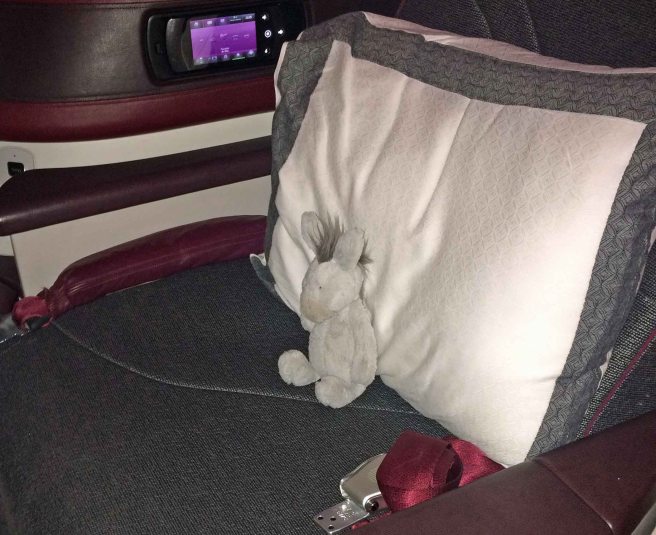 He has rather gone off flying these days. Except for those far too rare occasions when he manages to upgrade to business class, he finds airports and aeroplanes increasingly unpleasant.

Encouraged by the success of his trip to Spain by train last year, DonQui again decides to take the Eurostar from London and the super fast TGV (train à grande vitesse) on to Strasbourg.

Rather than changing trains in Paris he takes a tip from the kindly Man in Seat 61 and goes to Lille where he can change trains at the same station. He booked his tickets through Loco 2 which makes trans continental booking all very simple.

It all goes very smoothly. The 30 minutes between the Eurostar’s arrival in Lille and the TGV’s departure to Strasbourg is more than enough time. Changing in Paris necessitates a change of stations which involves more of hassle, uncertainty and time.

So why Strasbourg and why this time of year?

Well it is cold — bitterly so from DonQui’s perspective even if his Canadian relatives might beg to differ. Claiming the title of ‘Christmas Capital’ Strasbourg hosts the oldest constantly running Christmas market in Europe, dating back to 1570. 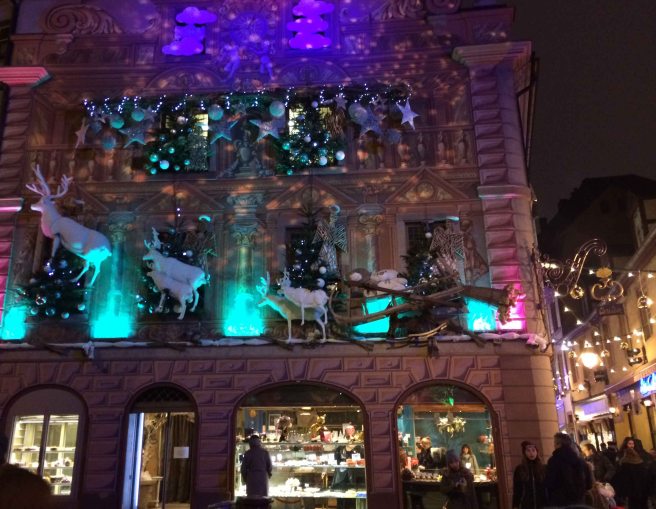 Some of the decorations are a little bit ‘over the top’ perhaps so much that they start to become ironic. Despite the cold weather the atmosphere is congenial and there are plenty of places to warm up with waffles, Glühwein and even hot spiced orange juice.

Packed full of excellent restaurants serving hearty Alsatian fare washed down with excellent local wines (Alsatian riesling is the best in DonQui’s opinion) there are plenty of great excuses to get out of the cold and settle in for a couple of hours.

The wonderfully compact medieval centre of Strasbourg is made for strolling although a boat tour around the circumvallating River Ille is well worth it in DonQui’s opinion. With its mix of French and German culture it is the sort of place to wander around, discover hidden secrets down a cobbled ally, and take in the atmosphere. It is just the sort of place DonQui loves returning to.

Beasts of field, stream and forest are going into hiding. It is game season and DonQui is in a particular carnivorous mood.

With a herd of visitors on their way, DonQui decides that a haunch of venison is in order. There are few meats he enjoys more than this food of Kings — except perhaps for wild boar. Good wild boar is almost impossible to find in England. What is sold as such is cross-bread with domestic pigs, or farmed, or both. So venison it is.

The friendly butchers at Mills and Sons (and daughters) in Southwold, have prepared a particularly excellent 1.7kg joint for him. It is from a wild Red Deer hind which had been happily running around the local fields not very long ago. It has been hung, tied and larded with fat to gently baste the meat as it cooks. Proper wild game has virtually no fat, this is one reason why it is such a health source of protein. A bit of larding (added fat) on the outside really helps the cooking process and stops the outside from drying out. Some vegetables from the local farm shop will be added to the feast.

Aiding him in his quest to produce the perfect roast venison is Nichola Fletcher’s most helpful Ultimate Venison Cookery book. She advises roasting times based on the width of the joint rather than overall weight. This makes sense to DonQui as, after all, a long thin piece of meat might weigh more than a short fat one but is likely to cook more quickly.

The trick is to roast quickly at high temperature followed by a very long resting time. When resting the joint will continue to cook slowly — the result being something that is evenly pink and tender. As it has no fat, roast venison will dry out, becoming dry, tough and tasteless if it is cooked more than ‘medium rare.’ 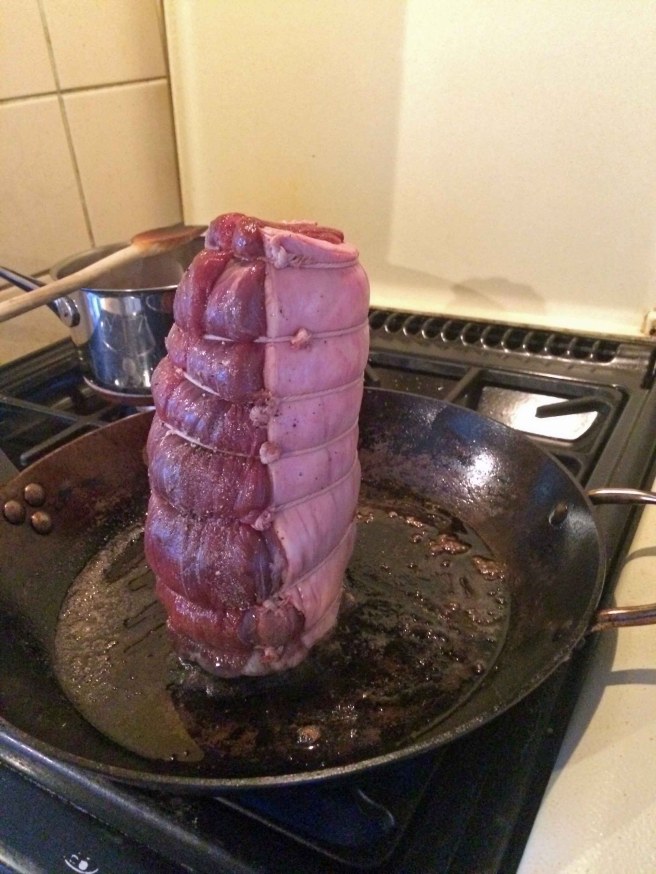 DonQui rubs the outside with a mix of salt and pepper then browns the haunch on all sides in oil and butter at high heat. This gives the outside nice colour and flavour. If you do not do this beforehand the outside can tend to look a little greyish.

Then he pops it in a pre-heated oven at 200º C for 40 minutes. This is based on Nichola Fletcher’s advice of 3 minutes per centimetre of width. DonQui’s haunch is 14cm thick at the widest point so 40 mins seems about right. Then he takes it out of the oven, covers it loosely in tinfoil, and leaves the meat to rest for another 40 minutes while he gets on with the roast potatoes and finishing off the gravy.

The lovely juices which collect in the pan during the resting process are added to the gravy. This DonQui makes from a variation of his usual rich meat sauce with the addition of 12 crushed juniper berries, mushroom stalks, thyme, rosemary, garlic, tomato paste and red current jelly. This time he does not make a roux, as through reduction it seems thick enough. This is rather fortuitous as, unbeknownst to him at the time, one of his guests likes to avoid gluten. 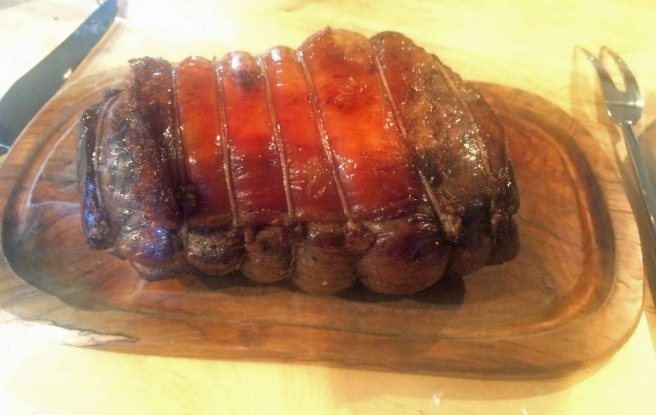 Overcooking roast venison will toughen it and leave you with nothing better than old shoe leather. The meat should be a lovely even pink throughout — DonQui is delighted to see that this is indeed the case. 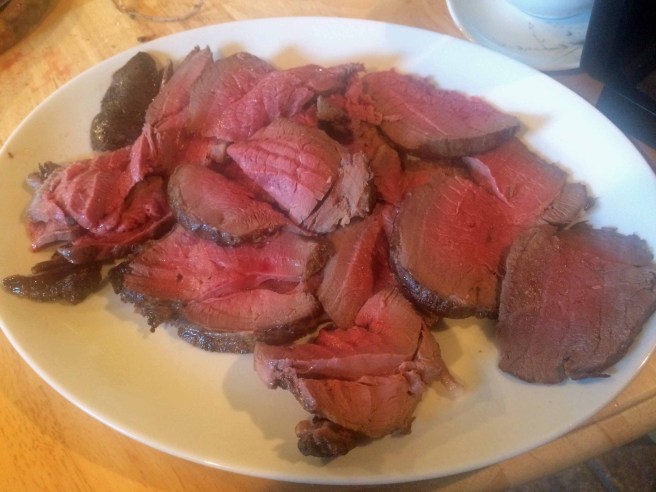 As he carves, he can tell that it is also beautifully tender. He has heard that some people do not like rare meat. If that is the case then they should not try roasting a haunch. Far better in that case to slow cook diced venison in a wine-based stew until the meat falls apart.

DonQui serves his venison carved on a platter with some of the gravy poured on top with the addition of fried mushrooms along with a scattering of chopped parsley and thyme.