Those of you who have been following DonQui’s adventures will know that he has been away from the home paddock quite a bit over the past few months. Home again now, he trots up to the allotment to see how things are doing. One of the problems with going away in the Spring or Summer months is that when he comes back he often finds the allotment overgrown with weeds and that he has missed some of his favourite produce.

Not so this year. He spaced his trips away to leave short weeding and harvesting gaps in between. He got the best of the soft fruits earlier in the summer.

Now that the strawberries and raspberries are over but the blackberries and blueberries are just starting to come into their own. 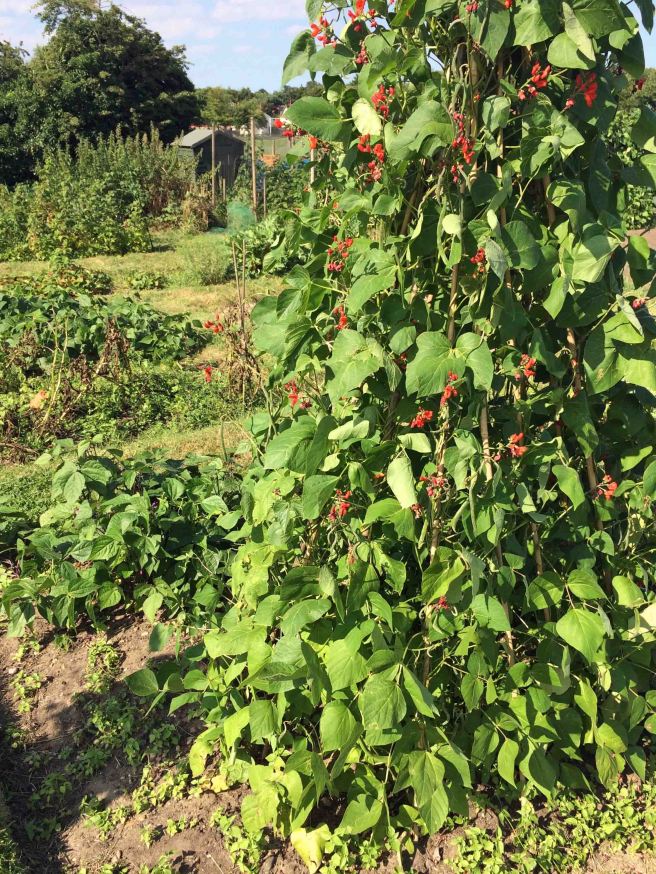 Beans are some of DonQui’s favourite vegetables and they do consistently well on his little plot. Earlier in the year he had some trouble with aphids on the broad beans. A tip from a veteran gardener helped DonQui to deal with them. Snip off the tips of the bean stalks and spray the little blighters with a highly diluted washing up liquid. This sorted them out and they never returned.

After a very good harvest the broad beans are now finished and the dwarf French beans are producing a bumper crop. DonQui planted several varieties and he is glad that he did as it spreads out the production. Some of the later ones are not quite ready yet while others are more than ready for harvest.

DonQui likes his beans young and thin. So he does not like to delay harvesting them. This means, inevitably he ends up with far more than he can eat in one go. Fortunately beans freeze very well so this is what DonQui does, getting on with the job while the beans are freshly picked.

First he sorts them into two-portion piles of roughly equally thick beans.

Then he blanches them in boiling water. Just 45-60 seconds for the thin ones and around 2 mins for the thicker ones.

Next, he drains them and plunges them into cold water. Iced water would be even better but DonQui does not have any ice to hand. This stops them from continuing cooking.

He lays the drained beans on paper towels to dry, then puts them into freezer bags and into the freezer. 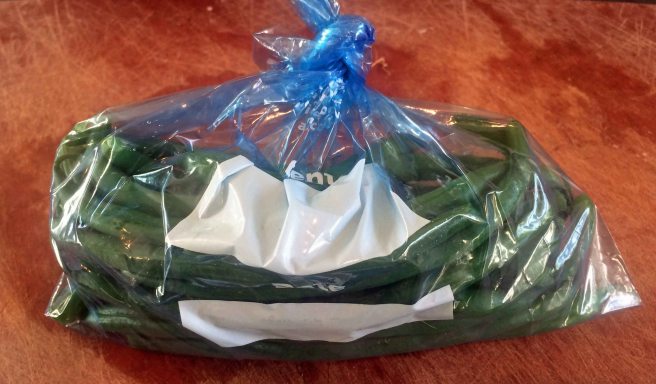 They will be good right through the winter and into next Spring. When cooking the frozen beans he simply thaws them out then swishes them around with butter in a pan. This seems to be all they need and they are quite delicious.

Having dealt with one huge pile of beans he goes back up to the allotment a few days later and this  is what he comes back with. The runner beans are starting to produce as are the purple French beans. The purple beans turn green when cooked and taste no different from the green ones.