It is a bit crowded in here DonQui thinks to himself while wondering at the propensity of humans to squeeze themselves into very small places.

He is flying from Barcelona to Seville on Vueling Airlines. They are a budget airline apparently. As a creature who likes his comfort DonQui does not like the sound of that. First Class is the style he wishes to become accustomed to. 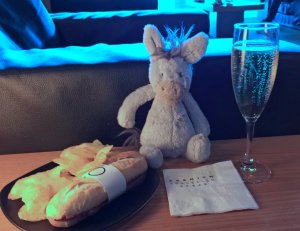 Fortunately he has a little black card which gives him free access to airport lounges. Earlier, when he showed it to the nice lady at the desk he suddenly became a ‘premium traveller.’ DonQui was very pleased that the humans treated him as special rather than herding him around the terminal like any ordinary donkey. With the help of a glass of cava even forgot for a moment that he would soon be flying on a budget airline.

The flight actually wasn’t bad and 90 minutes later DonQui is in Seville with plenty of time to explore and have a drink or two before tucking into tapas. First impressions are favourable: interesting narrow streets with something new to see around every corner.

More importantly there seem to be lots of tempting bars and restaurants.

A beer or two later at the rather pleasant Milagritos Restaurant in sight of the cathedral, DonQui saw a sign advertising local flamingos at 21:00. This rather puzzled him. It was not clear whether they were on the menu or on show. Either way DonQui decided he needed to find out.

Duchess told him that he was a silly donkey and that flamingos and flamencos were not in any way related. Neither were on the menu but one was on show. And a very impressive show it was too.

It could have been cheesy and overly touristy but instead it was a very intimate performance delivered with great passion and emotion. The evening included 3 tapas per person for €15 and the food was good if not truly excellent. DonQui particularly liked the chicken with ceps (a type of mushroom), the pork in sweet wine sauce and chicken paella were also very good. 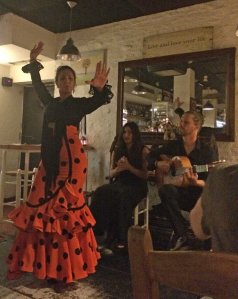 After the meal DonQui was offered a brandy on the house. It was a very nice gesture even if it did taste of toffee and old straw with a bouquet that reminded him of his stable back home.

All in all a very good night out.

Milagritos Restaurant (Alemanes 35, Seville) for its excellent location, friendly staff and wonderful flamenco. Despite the prime tourist area the prices were reasonable and there was a wide variety of descent tapas on offer.

Priority Pass is definitely worth having if you can get one free with your bank account or with some other incentive. It lets you into lounges worldwide even if traveling on cheap fares and budget airlines. Whether it is worth the full list price of £250 (prices vary according to country) is another matter altogether.