It is easy to eat well in London if one has lots of dosh.

It is even easier to come away from an eating establishment feeling either ripped off or having had to make do with sub-standard food of dubious origins and even more dubious cooking techniques.

If you know where to go, this wonderful cosmopolitan city offers an incredible variety of fantastic foods influenced by every country around the globe.

DonQui is a bit of a francophile and if push comes to shove, he has to admit that French food and style are almost always his first choices. There are plenty of good French restaurants in London, partly down to the hundreds of thousands of Frenchmen and women who have made London their home in recent times. This is not a new phenomenon. French exiles came to London in their hundreds of thousands at the time of the Huguenot exodus in the 17th century. Kettners in Soho (which sadly closed earlier this year after 149 years) was founded by Napoleon III’s chef in the 1800s while the French House, just around the corner, was the unofficial headquarters of de Gaulle and the French resistance during the Second World War.

For a simple, high quality, meal in the west end of London, Prix Fixe is DonQui’s first choice. On Dean Street in the heart of Soho it offers French brasserie style food and ambiance at very reasonable prices. The pre-7pm menu has 2 courses for just over £10 while the later fixed menu has 3 courses for £25. DonQui has eaten here many times in the past and tonight he is delighted to find that the quality and ambiance remains as good as ever.

Being a notorious gourmand, DonQui opts to shell out the £3 supplement for the foie gras terrine starter and he feels that it is worth every extra penny. 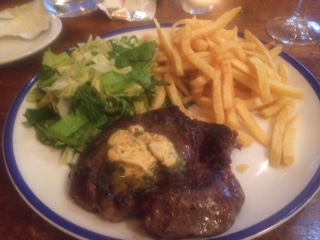 Another supplement (£6 this time) lands him with a main course of entrecôte steak frites. Ordered medium rare the steak is beautifully seared on the outside while remaining pink and juicy in the middle. The frites are proper French fries — thin and wonderfully crisp while still soft on the inside. DonQui’s only complaint (and this is his finicky taste buds rather than a mistake in the kitchen) is the mustard dressing on the lovely green salad. Unfortunately DonQui has a near allergic reaction to mustard.

Washed down with an excellent glass of Côtes du Rhône and finished off with an adffogato (an Italian classic rather than a French one) DonQui once again enjoys a wonderful meal in a relaxing atmosphere while watching the streets of Soho come to life as night falls.

When it comes time to pay the bill, DonQui feels that he has had great value for money. He will come again.

One thought on “Good eating in London”