On a recent visit to London Don Qui decided to try out a restaurant he has not been to before. Looking for a place that offered an early supper so he could go to a play, he settled on Blanchette on the Regent Street side of Soho.

It was a very good choice. Offering ‘French style sharing plates’ Blanchette was perfect for a relatively light meal with lots of interesting and tasty morsels on offer. 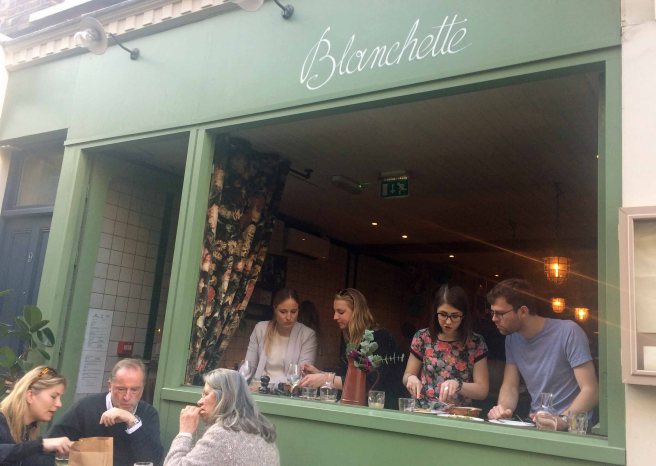 Blanchette is a relatively small establishment and at 5pm the place was already heaving, helped by the warm spring day. Several diners sat at the bar by the wide open window or outside, enjoying both the food and the far too infrequent English sun.

Between him and Duchess, DonQui sampled crispy frogs legs, goat’s cheese, chicken breast in a morel sauce with asparagus and peas, crispy squid, and probably the best pommes frites he has ever tasted along with béarnaise sauce for dipping. This was all washed down with an excellent Beaujolais and finished off with a near perfect creme brûlée and a calvados.

The crispy frogs legs and crispy squid were both battered and fried with herby batter being the dominant taste. It was probably a mistake to order both but when DonQui explained that this was why he had not eaten all the squid the kindly waitress offered to take it off the final bill.

Service was friendly and knowledgeable and the place had a relaxed vibe. As DonQui likes to take his time over a meal he felt that the dishes perhaps came a bit too quickly in succession for his taste. If one was in a bit of a hurry to make it to the theatre on time then this would not necessarily be a bad thing.