First impressions, as the airport bus drops DonQui off outside a bland looking shopping centre, are not auspicious. The area seems to have quite a suburban feel to it with lots of traffic and modern buildings.

Yet tucked away behind the shopping centre, towards Dublin Bay, is a pleasant park and a number of quiet streets filled with coffee shops, pubs and eateries of all kinds from Indian to Italian and, of course, Irish. There is also a small quirky antiques market with yet more places to eat and drink. Some are little more than small stalls, others are cafés, and there is also an up-market restaurant.

Just because it is on the coast of the Irish sea don’t expect a beach holiday in Blackrock. The view of Dublin Bay is atmospheric but it is not the sort of place to tempt DonQui to dip his hooves in the water. On a late spring/early summer’s day the weather is typically Irish with cloud and rain interspersed with all too infrequent sunny periods.

Over three days DonQui tests out many of the local eateries and watering holes. There are many more he would have liked to have tried but he will have to save these for another visit. In no particular order these are his views of the places he tried out:

The Mellow Fig: From the outside it looks like a fairly traditional ‘caff’ where one might expect tea and a bacon and egg breakfast. Inside it is anything but that. With pastel colours it clearly caters to ‘yummy mummies’ in search of a light lunch or, yes, breakfast. The pastry and cake counter looks divine. DonQui’s breakfast at the Mellow Fig consists of an excellent croissant and one of the most perfect cappuccinos he has had in ages, The topping of high quality chocolate flakes rather than the usual cocoa powder is a very nice touch indeed. 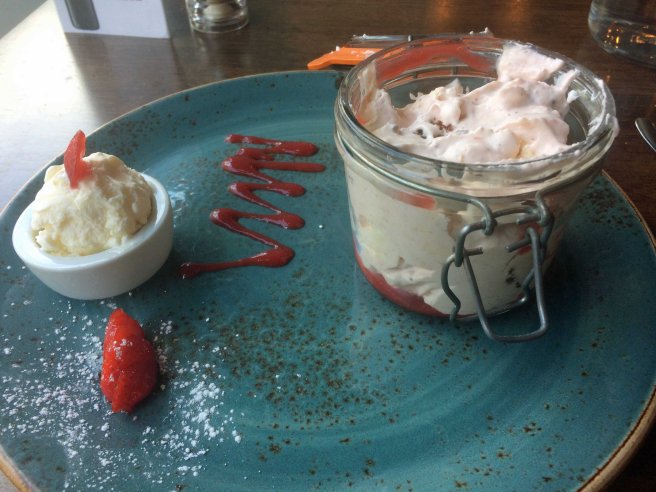 Rage: Although there are other things on the menu this place specialises in flame grilled steaks and that is what DonQui goes for. Nicely seared on the outside and evenly juicy inside, his sirloin steak lives up to expectations. The whiskey and mushroom sauce is divine and the accompanying triple-cooked chips are just as DonQui likes them — crispy on the outside and soft in the middle. His strawberry Eaton mess desert (see photo above) is a wonderfully calorific sweet to finish off with.

Flash Harry’s: Named after DonQui’s fictional hero — Harry Flashman as portrayed in George MacDonald Fraser’s Flashman books rather than in Tom Brown’s School Days — he had to try out this bar. With football on the many television sets and a pool table outside the main bar area this is not the sort of place a non-sports fan like DonQui would normally frequent. That said Flash Harry’s has a decent selection of beers on tap and is pretty relaxed.

Café Ciamei: This great little casual Italian restaurant is at the north end of Blackrock market.

Their pizza’s are excellent with nice thin crispy crusts even if they are not cooked in a wood-fired oven. Duchess’ seafood risotto is indifferent but the atmosphere makes up for it. They also have superb proper Italian coffee. DonQui’s espresso is a tiny high-powered caffeine shot of the sort one might expect only to find in Italy.

Dunne and Crescenzi: This was DonQui’s only disappointment. Billed as an upmarket Italian restaurant DonQui expected much. The atmosphere and very helpful waitresses lived up to expectation but unfortunately the food did not. At best it was ordinary and certainly not worth the prices nor the marketing.

Instead of fresh basil DonQui’s caprese salad came with pesto. The pesto was good but it was not a proper caprese and the tomatoes were tasteless. The main of grilled chicken supposedly came with a truffle and mushroom sauce but there is no hint of truffle, the chicken is overcooked, the accompanying roast potatoes are barely roasted and have frost damage.

It is not often DonQui leaves much of his main dish but in this instance he does. To their credit, when DonQui tells the pleasant waitress of his views she is most apologetic and not only does not charge him for his main course but she throws in a free glass of wine. The house wine, it must be said, is really top-notch.

The owners started off selling fine Italian wines, salumi and cheeses and their wine certainly more than lives up to expectation. DonQui sees a nearby couple sharing a charcuterie board and given how good it looked he wishes he had ordered the same. He does not sample the cheese as when he asks if it had been left out of the fridge to let the flavour develop he is told that it had not. There are few things more sacrilegious in DonQui’s view than eating good cheese straight from the refrigerator. 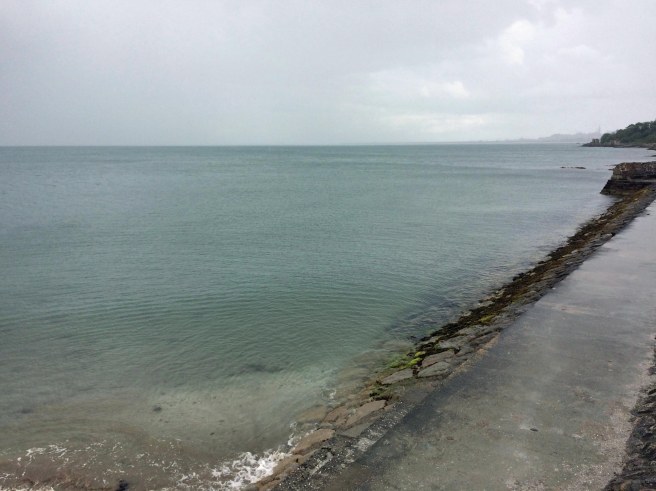 There is a direct bus to and from Dublin airport every hour and the city centre is quickly and easily reached from Blackrock station via the Dublin Area Rapid Transit (DART) train. DonQui stayed in an excellent Airbnb apartment which was much more spacious and at a fraction of the price of a Dublin city hotel. Next time he visits Dublin, DonQui will probably stay in Blackrock again. There are still plenty of great looking restaurants for him to sample and it was very pleasant staying in a place with a local neighbourhood rather than touristy feel.

One thought on “Blackrock Dublin”