Ethiopia has a distinctive cuisine which DonQui would like to know better. The staple is injera – a very large soft flatbread made from fermented teff flour. It tends to be served rolled up and the diner unrolls it to place a spicy thick stew (wat) on top.

Injera has a slightly sour taste and it takes DonQui some time to get accustomed to it. Dishes without meat are usually identified as ‘fasting’ since the Ethiopian Orthodox Church has a number of fasting days when meat is not supposed to be eaten.

With only a few days in Addis Ababa, DonQui is only able to try out a few places and sample a limited number of dishes. He would have liked to try kifto which is a sort of Ethiopian tartare of high quality spiced meat served barely cooked or raw. Unfortunately he does not get around to it on this trip.

A ‘Traditional Ethiopian feast with Cultural Show’ sounds frighteningly touristy to DonQui but dinner at Yod Abyssinia comes highly recommended so he decides to give it a go. The show is actually rather good and he does not feel like he has entered a tourist trap. 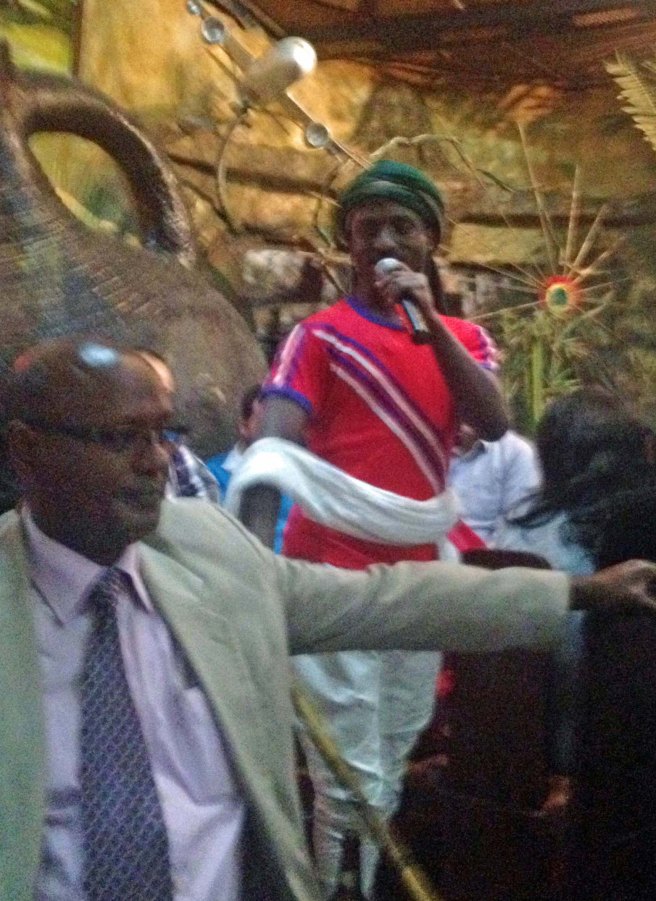 The vast majority of customers are well-heeled looking locals and before long many of them are up on their feet and dancing along with the music. 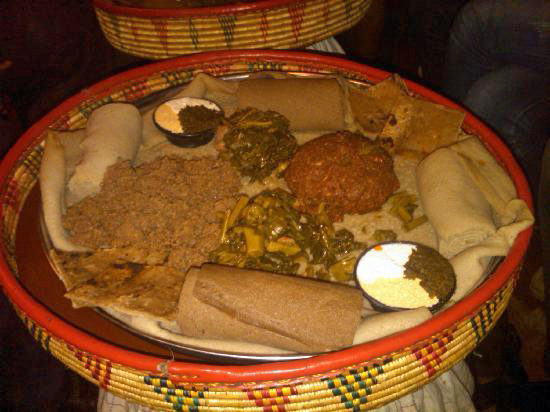 The food is excellent with an extensive buffet giving DonQui the chance to sample a wide variety of Ethiopian dishes he might not otherwise have come across. This is a good place to come with a group to share the vast array of food on offer.

DonQui is surprised at the large portions which seem to be offered up in the restaurants he goes to. At the Jupiter Hotel restaurant he tries out tibs fir-fir with injera. Tibs are roasted meats — in this case lamb. The fir-fir is a spicy tomato sauce with also has slices of rolled injera mixed in. The dish is is served with two additional injera, not than DonQui needs more.

It is excellent but the amount is overwhelming and DonQui can barely manage half of it. He reckons that his portion could easily feed a small family. A Kenyan expat tells him that such large portions are increasingly common in Addis Ababa. 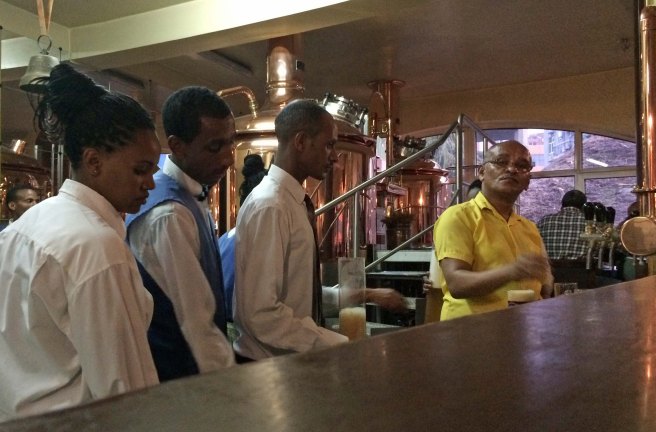 Ethiopian beer is good. DonQui previously mentioned Habesha Cool Gold which is one of his favourite local bottled beers. Better still are the German style blonde and dark beers brewed on the premises of the Beer Garden.

Catering to a mix of locals and expats this brew pub quickly becomes DonQui’s favourite watering hole. He particularly likes their dark beer but does not go as far as to try out one of the five litre towers. The Germanic influenced food is excellent — especially the chips and the Beer Garden’s signature grilled chicken.

DonQui does not get around to sampling tej — Ethiopia’s honey wine. He does, however, drink plenty of the country’s most famous beverage which is coffee. The Ethiopians claim to have discovered coffee and they take great pride in it. Served in a similar way to Turkish coffee it has a smooth, slightly chocolaty taste which DonQui likes very much. At the end of a meal it is often somewhat bizarrely served with popcorn.

2 thoughts on “Food and Drink in Addis Ababa”