Pizza is a serious matter in Naples — the city in which it was invented and perfected. In DonQui’s humble opinion, pizza in Naples if far better that pizza more or less anywhere else on the planet.

Standards are maintained by the Associazione Verace Pizza Napoletana (True Neopolitan Pizza Association), or Vera Pizza for short. It aims to promote and protect ‘true Neapolitan pizza’ in Italy and around the world.

DonQui has a few tricks to ensure that his pizza lives up to expectations. Firstly he looks for a place that uses a traditional wood fired oven. Secondly he only ever orders pizza in Italy at night. Good pizzerias will fire up their ovens in the evening and it will take until close to 9pm before the ovens are properly hot enough to cook the prefect pizza. Thirdly he goes for simple classic ingredients, no bits of pineapple, pulled pork, curried chicken or other Anglo-Saxon atrocities for DonQui.

The classic Neapolitan pizza is the Margarita which is said to have been invented in Naples in 1889 for Queen Margarita in the early years of Italian unification. In a clever move of political sycophancy, its creator managed to replicate the colours of the new Italian flag: red (tomato), white (mozzarella) and green (basil). 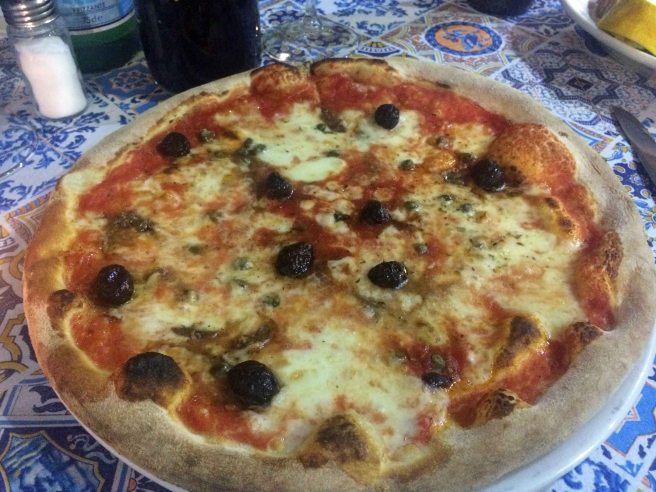 Anchovies, capers and black olives are other traditional ingredients which DonQui quite likes. Here the local anchovies are not as salty or overpowering as tinned anchovies can be outside Southern Italy.

Finally DonQui looks for a place that is not too fancy-looking while still pulling in a substantial local crowd. The many places lining the Via Partenope close to his hotel look inviting but DonQui worries that they might be overpriced tourist traps. A quick skim through TripAdvisor seems to confirm his fears with comments about dodgy surcharges and surly waiters abounding. 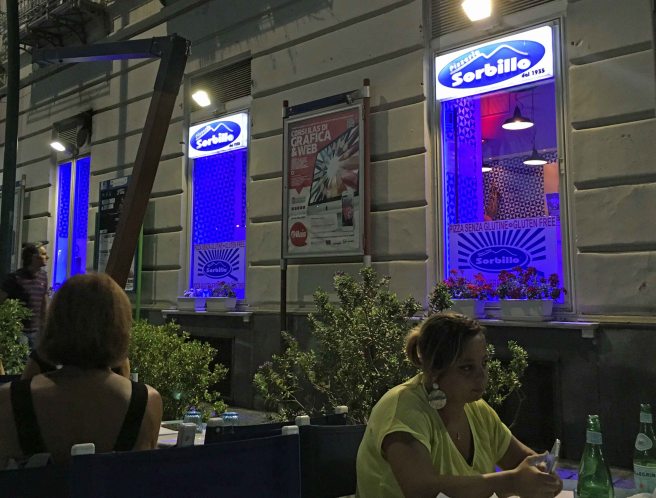 At the very end of Via Partenope, at the corner of Piazza Vittoria, sits an establishment with promise. It is just before 9pm and Sorbillo Lievito Madre al Mare is filling up with locals. Offering pizzas with top organic ingredients cooked in a wood fired oven it is little wonder that it is a popular place. There are even gluten free options, not that DonQui cares about such things. 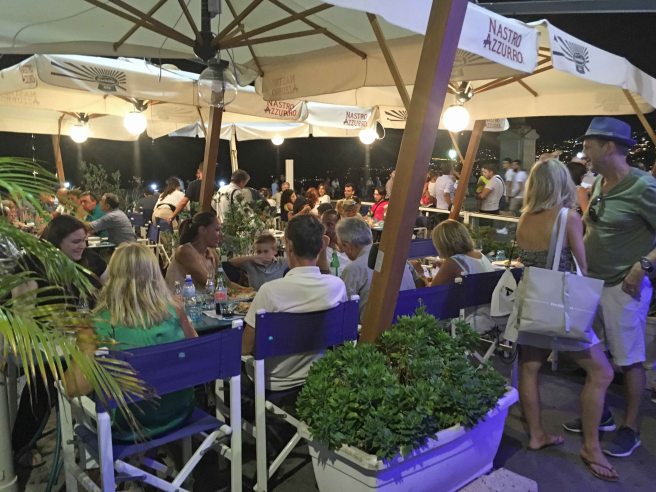 DonQui manages to get one of the last available tables as a queue forms behind him. Those arriving later put their names down on the waiting list and look on enviously as DonQui tucks in.

By 21:30 a fairly large crowd has built up, all waiting patiently for their turn for a table.

The choices are interesting. Although the menu is in Italian only, DonQui is able to decipher enough to understand the basics. He had thought he might order a simple classic margarita but the Cetara catches his eye. 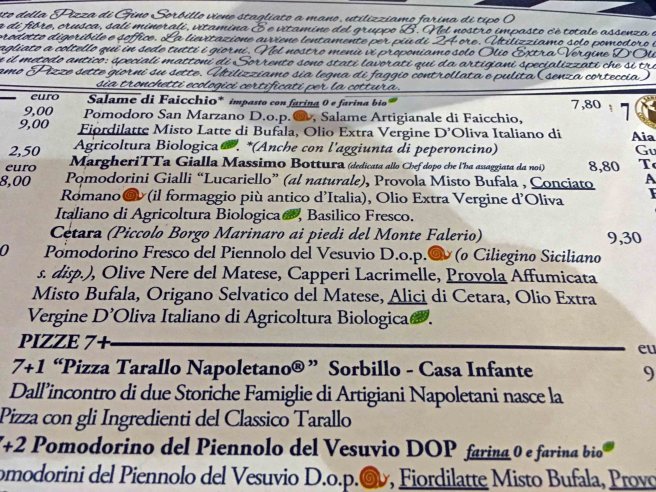 With fresh tomatoes grown on the slopes of Mount Vesuvius, smoked Provola cheese, capers, olives, oregano and Alici di Cetara, it sounds most intriguing. Alici di Cetara is an oil infused with anchovies. Reminiscent of garum, the infamous fish sauce which the Ancient Romans added to just about everything, DonQui decides he wants to try it. 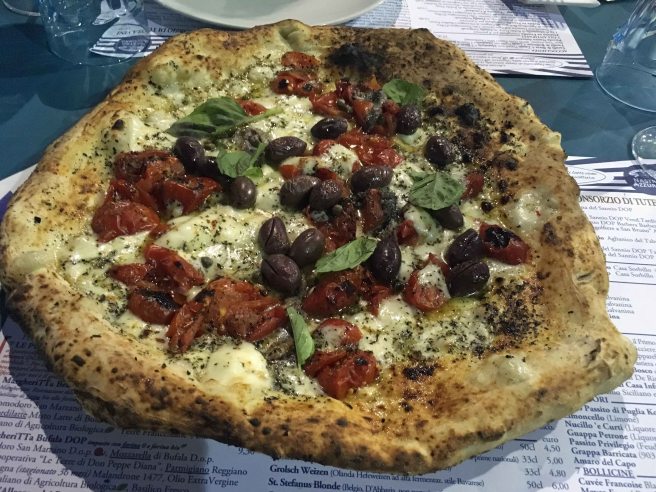 To say that it is delicious would be an understatement. The thin, springy crust, slightly charred from the super hot wood-fired oven is an absolute delight. The combination of cheese, tomatoes, basil, olives, capers and anchovies are a perfect taste of Naples. The pizza is large enough for him to share with Duchess and the bill is most reasonable — far less than any of his other previous Neapolitan meals.

DonQui is unaware that Gino Sorbillo is one of the most famous pizza chefs in the world. His coastal establishment is the second of his Naples outlets and he is soon to open one in New York’s Times Square. DonQui feels quite pleased with himself that he managed to discover Sorbillo’s seafront establishment before knowing any of this.

One thought on “In Search of the Perfect Pizza”