So… DonQui is in a bit of an agricultural mood at the moment. Having whipped his allotment into shape he is in need of a few more things to plant. He is thinking of beans – they always seem to do well and the surplus can be easily frozen. A few more herbs might be in order too. He already has thyme, oregano, tarragon, parsley, coriander and chives but some basil would be nice and Duchess has her heart set on some mint. The latter is a problem since mint runs roots all over the place and could soon take over everything. Never mind, he will deal with that in due course. In the meantime he needs to decide where to go to pick up some more plants.

According to The Guardian newspaper the Darsham Nurseries,  just down the road, is on the list of the 100 best places to eat in England.

A nursery café one of the best places to eat in England? Normally all DonQui might expect in such a place is a stale piece of cake and some instant coffee – not for him!

Yet this information comes from a most trusted source so he decides to give it a try. After all he does need to buy some plants.

And what a delightful surprise it is!

Duchess is delighted with her ‘English Garden’ cocktail. Such things are not to DonQui’s taste but he can appreciate the fresh minty aroma while he sips on a good glass of Beaujolais.

The menu offers a tapas-style selection of modern European sharing plates in larger than expected portions.

DonQui particularly enjoys the seasonal grilled local asparagus with romesco and almonds. Romesco is a Catalan pepper based sauce from Tarragona and although DonQui did not sample this when he was in Tarragona he finds it quite delicious. The locally sourced  Blythburgh pork chop with apricots was simply divine although DonQui struggles to see it as a ‘small dish.’ 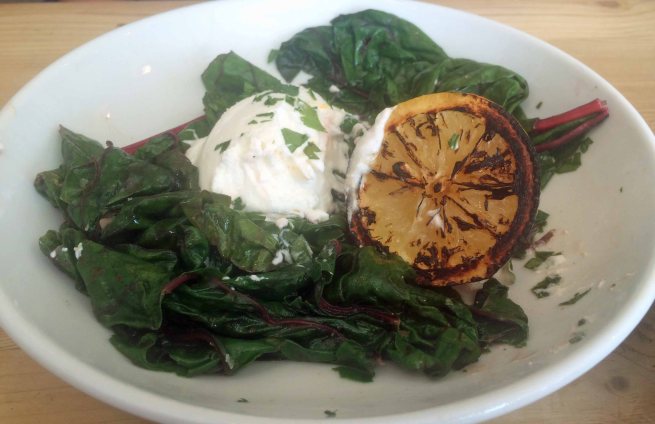 Duchess’ favorite was the ‘garden greens’ (Swiss chard) with burnt lemon and goat’s cheese curd. It was slightly better presented that the picture above indicates but by the time DonQui got around to taking it Duchess had already tucked in!

One side dish DonQui had to order was radishes with butter and salt – a very simple French classic. As a very young colt DonQui remembers his grandfather raving about radis au beurre. He had fought at the Battle of the Somme in the First World War and radis au beurre was something he had acquired a taste for in the cafés behind the lines when he was away from the action. He even insisted that the French word for butter was aubeurre and no amount of DonQui’s primary school knowledge could convince him that the ‘au’ was not an integral part of the word. “I was in France and I know,” was his emphatic reply and that was that.

The meal was utterly delicious, finished off with a heavenly concoction of creamy cheese over fine phyllo pastry with honey and nuts. It was billed as a ‘cheese cake’ but the name did not do it justice. DonQui is not a great fan of traditional cheese cake and this was anything but.

And yes DonQui did pick up some mint which is now awaiting re-planting. The nursery did not have any beans but in light of the most delicious lunch he really does not mind.

3 thoughts on “Food and Farming”